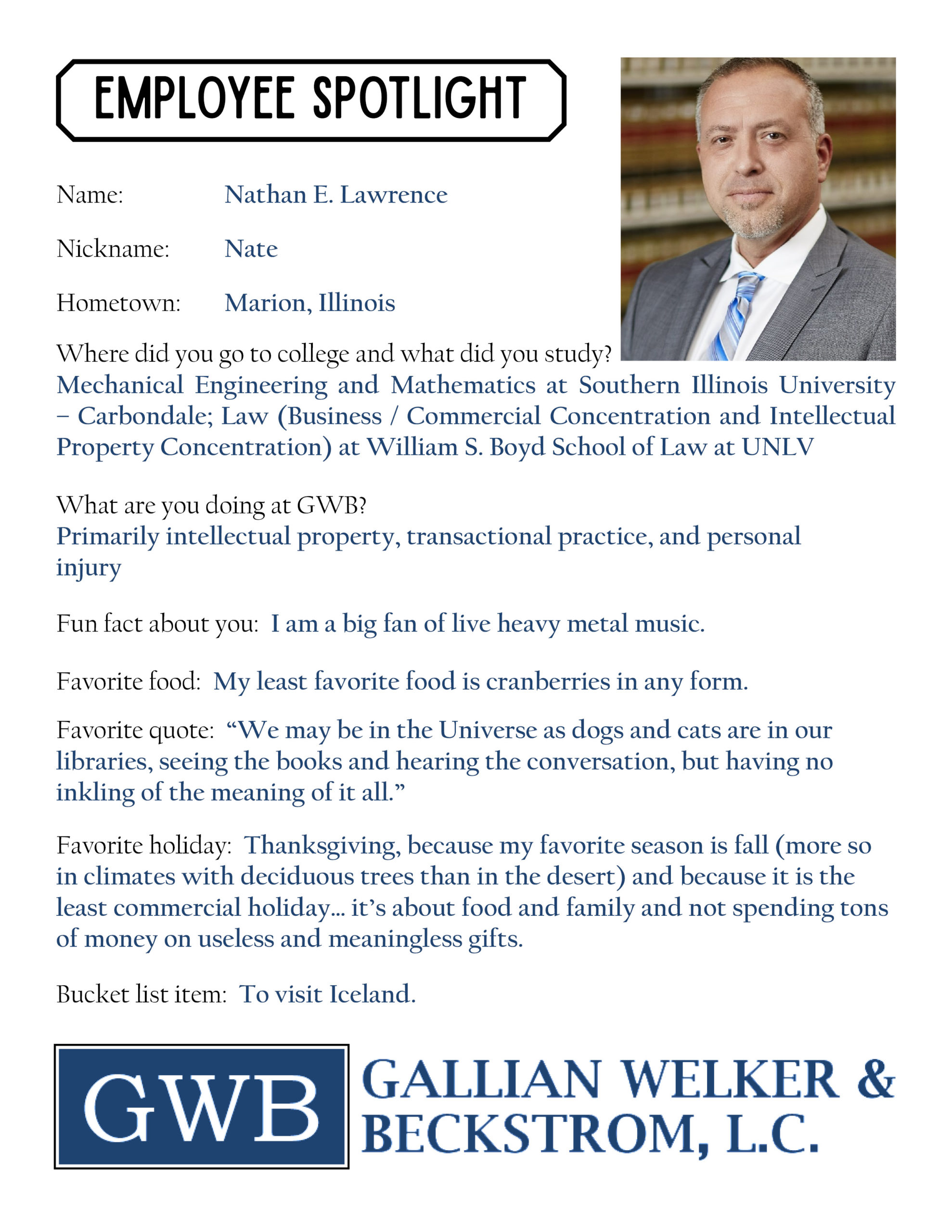 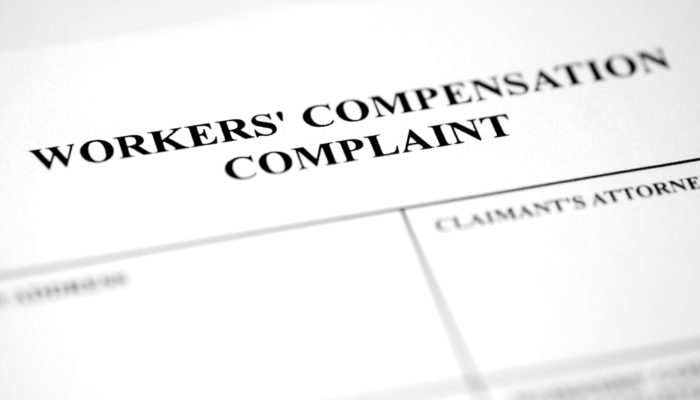 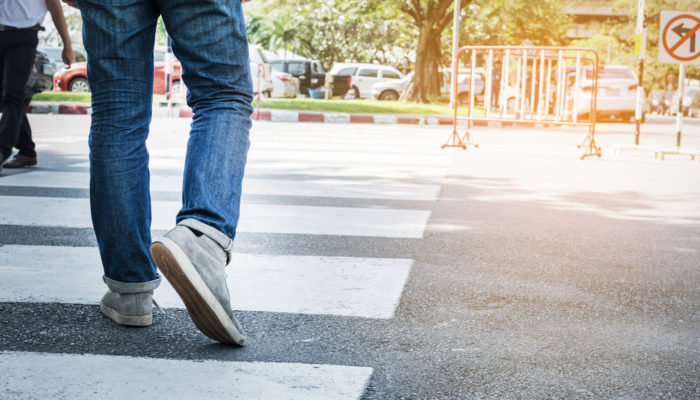 On a cold December night, a young man walks down the sidewalk of a side street to its intersection with a major road. There are no traffic lights, stop signs, painted lines, or markings of any kind at the intersection. A hundred feet down the major road is a traffic signal with a painted crosswalk and electronic signage for pedestrians. The young man intends to cross the major road to a enter shopping plaza directly across the street from where he now stands. Rather than brave the cold to walk down to the controlled intersection, he immediately starts crossing the major road, which contains two lanes of traffic for each direction, plus a middle turn lane, with sidewalks on both sides of the roadway. When he gets to the middle turn lane, suddenly, a vehicle exiting from the roadway at the shopping center across the street turns left onto the major road. Not seeing the young pedestrian, the vehicle hits the young man and sends him flying 20 feet through the air, finally landing on his back in the roadway.

The driver who hit the young man is frantic, frightened, and upset. He thinks, how could this young man jaywalk across the street right here? The driver runs over to the young pedestrian lying on the road and yells that he should have known better.

But was the young pedestrian jaywalking? There was no marked crosswalk where he crossed, and there was an electronic crossing with a painted crosswalk just half a block up the road. However, the lack of a painted crosswalk does not answer the question. In Utah, legal crosswalks do not necessarily have to be painted or otherwise marked as crosswalks. UCA Sections 41-6a-1002(3) and 41-6A-1003(1) expressly reference unmarked, or implied, crosswalks. The cases interpreting the statute have ruled that a legal, unmarked crosswalk exists at an intersection where sidewalk is present on both sides of the intersection. See, e.g., Langlois v. Rees, 951 P. 2d 638 (Utah 1960). Thus, in our example, the lack of a painted crosswalk did not render the young pedestrian a jaywalker.

The young pedestrian was crossing an intersection with vehicular access on both sides of the main road, and with pedestrian sidewalks on both sides of the road. Consequently, the young pedestrian was perfectly within his rights to cross the road where he did. He was not a jaywalker. He did not violate the law. He did nothing wrong. The driver of the car that crashed into the pedestrian is fully at fault for the collision and for the pedestrian’s injuries. The driver’s insurance company will be responsible to pay for the damages of the pedestrian, up to the limit of the driver’s insurance policy. The police officer who investigates the collision will have to decide whether to issue any type of traffic citation or criminal misdemeanor citation to the driver of the vehicle.

Furthermore, as a corollary, one should not presume that drivers on Utah roads have no duty to yield to jaywalkers. UCA §41-6a-1006 specifies that all drivers of vehicles, at all times, must “avoid colliding with a pedestrian.” This statute makes perfect sense. A pedestrian versus a vehicle is not a fair fight. Just because a person is jaywalking does not mean that a driver has no obligation to stop for, or avoid striking, the pedestrian. Because the risk of catastrophic injury and death to a pedestrian if hit by a moving vehicle is so great, the law imposes a duty on all drivers to watch for and avoid pedestrians, regardless of whether the pedestrian should be walking at that particular location or not. If, in the example above, the young pedestrian was not crossing at an unmarked crosswalk but was crossing the street at another location where there was no intersection with pedestrian walkways on both sides, he would have violated the law by jaywalking. And if the same vehicle in our example were to strike him at a location other than in a legal marked or unmarked crosswalk, then liability and fault for the collision likely would be shared by both the driver and the pedestrian. The driver would be at fault for failing to see and avoid a pedestrian, and the pedestrian would also be at fault for jaywalking—crossing the street outside of a legal crosswalk or other designated pedestrian pathway.

By Michael I. Welker, Esq.

Wheels of Justice is a non-profit corporation, organized by a group of attorneys who are cycling enthusiasts, to raise money for, increase awareness of, and provide limited pro bono legal services to non-profit organizations that devote their time and passion to the prevention and reduction of child abuse, and assisting victims of abuse. Problems addressed by these institutions include child abuse, bullying, dysfunctional relationships, and internet safety threats. The organizations include: Prevent Child Abuse Utah, Friends of the Salt Lake County Children’s Justice Center, Operation Underground Railroad, and The Utah Domestic Violence Coalition. Each of these organizations fights, prevents, and ameliorates the effects of child abuse. These organizations are very good at what they do. They need our support.

Wheels of Justice organizes and operates fundraising bicycle rides in support of these organizations. Participation is not limited to lawyers. Nor is participation limited to accomplished or competitive-level riders. Any cyclist at any level can participate in the rides. Different rides include street cycling, mountain biking, or off-road cycling.

Wheels of Justice’s biggest annual event is called the “Ain’t No Mountain High Enough” ride held each September. This difficult ride sends the riders up all 5 of Salt Lake County’s riding canyons (Little Cottonwood, Big Cottonwood, Millcreek, Emigration, and City Creek) in one day. Many participate-few finish. All have a great time, regardless of how much of the course they complete. The ride is meant as a metaphor, showing children and their families who have experienced abuse that they can overcome hard challenges, and that victims, whether they suffered personal injury or emotional and psychological injury, can overcome, survive, heal, and thrive.

Wheels of Justice not only collects financial donations, but also sells its team “kit” and other merchandise to raise funds. In conjunction with its events, Wheels of Justice also provides food, water bottles, and other items. Every event is fun for the whole family. 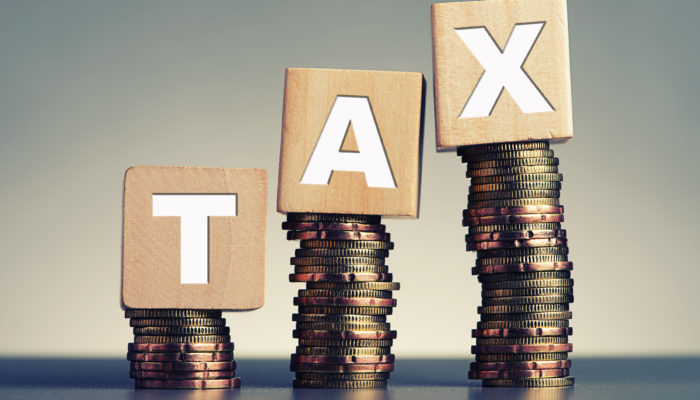 UPDATE (3/8/2019): Yesterday the Governor and the Legislature announced that they were putting a hold on HB 441 to tax professional services so it could be studied further and receive more public input in the months to come. This is the right thing to do and to take a step back to engage in a healthy and open dialogue on the complex and very challenging issues raised in the proposed law.

We encourage all to maintain contact with your legislators as further decisions are made from now through the next special session. Here is the contact information:

Here are stories on the developments:

Are you ready to pay TAX in Utah for SERVICES, in addition to sales tax? Currently the Utah legislature is fast-tracking a state tax reform bill that would add a tax on services and reduce sales tax and income tax. The change could result in a 3% service tax for all service providers, large or small. Teach piano? Coach or train? Are you an accountant, attorney or financial advisor? Website developer? All these service jobs would be required to pay a service tax under House Bill 441.

How the bill has been presented is a significant concern. It was negotiated in closed-door committee and brought to the floor with only 3 weeks left in the general session. This is not adequate time for the public to become informative, voice their opinion, and properly debate the issues.

You may contact Matt Ekins at Gallian Welker & Beckstrom with questions on HB441. Also, it is urgent you contact your local representative and voice your opinion:

For more information on HB 441 you can look at these stories: